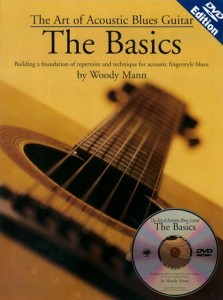 Whether your favourite blues guitarist is Robert Johnson, Muddy Waters, Blind Blake, John Lee Hooker, Big Bill Broonzy, orMississippi John Hurt, studying the basic techniques presented in this program is the first step toward being able to capture the essence of their traditional styles. In The Basics Woody Mann shows you practical ways to develop fundamental technique and offers you insights into the musical logic of blues guitar.

Woody walks you through each song, explaining the chord positions and picking techniques. He teaches blues in the keys of D, G, C, E, and A, presenting a wide selection of classic blues songs and instrumentals from the masters of blues guitar. Included in this program are the basics of the Delta blues of Robert Johnson, the ragtime style of Blind Blake (the man with the piano playing guitar), and the music of Big Bill Broonzy, Memphis Minnie, Willie Walker, and Willie Moore. Each song illustrates how solo players approach the guitar like a piano, playing melodies and bass lines simultaneously. Developing this independent two-line picking technique enables you to get the feel, syncopation, and subtleties of the music. The songs in themselves are studies in acoustic blues technique and present the authentic elements of the acoustic blues sound and style including blues technique and ways to ‘play off’ of the chords and improvise within a song.

This program is recommended for beginning acoustic blues guitarists as well as electric guitarists and acoustic fingerstyle guitarists of all levels who would like to go beyond ‘pattern’ picking and develop a more dynamic and syncopated sound.

Woody Mann had his first schooling as a teenager in the living room of Rev. Gary Davis, the now legendary gospel and ragtime guitarist. Mann soon went on to perform and record with blues masters Son House and Bukka White as well as contemporary innovators including John Fahey. He has recorded extensively, performed throughout the world, and is widely recognized as one of the world’s leading teachers and transcribers of acoustic blues music, having taught countless guitarists through his popular books and videos.