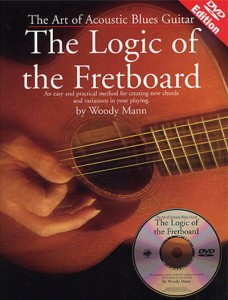 The ability to improvise and create variations within a song is the essence of the guitar work of the great traditional acoustic blues guitarists such as Blind Blake, Robert Johnson, Big Bill Broonzy, Rev. Gary Davis, and Blind Lemon Jefferson. By exploring the ways that chords, melodies, and rhythms work, Woody Mann presents practical and simple ways to create variations in your playing.

Woody teaches a new approach to seeing the fretboard and techniques for ‘breaking down’ chord blocks into smaller ‘pieces’ and connecting them throughout the fretboard. As he teaches the repertoire of the masters of acoustic blues, he demonstrates how melodies and harmonies can be derived from simple, moveable chord shapes. The Logic Of Fretboard is a method for relating the entire fretboard to the basic first position chord shapes that we all learn as beginners and using them to create new chords, melodies, and variations in your music.
Studying the songs and concepts that Woody presents in this program will help students to break out of ruts and begin playingup-the-neck without relying on bar chords or scale patterns. Woody’s approach to varying melody and bass lines against each other will also help students to develop a more syncopated and stronger picking technique. This simple and effective method allows students to increase their chord vocabulary by relying on logic instead of memorization.

Woody Mann had his first schooling as a teenager in the living room of Rev. Gary Davis, the now legendary gospel and ragtime guitarist. Mann soon went on to perform and record with blues masters Son House and Bukka White as well as contemporary innovators including John Fahey. He has recorded extensively, performed throughout the world, and is widely recognized as one of the world’s leading teachers and transcribers of acoustic blues music, having taught countless guitarists through his popular books and videos.