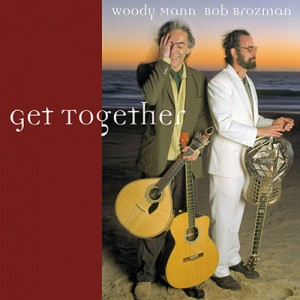 01. Heading Uptown
02. Cat Burglar
03. The Abyss
04. Through the Alley
05. It Happened in Monterey
06. Struttin’ in Times Square
07. Danca do Gata
08. Tampa Slow Grind
09. Where the Southern Crosses the Dog
10. Bentonia Dreams
11. Relocating to Chicago
12. Death Don’t Have No Mercy
13. Minglewood Memories
14. Moonlight Kisses Over Brooklyn

GET TOGETHER (with Bob Brozman)

Woody and Bob both come from traditional blues backgrounds but have added many other influences to their unique styles. The original instrumentals on this recording draw from several genres of music including but not limited to Blues, Caribbean, Calypso and Hawaiian music. The duo improvises on a variety of instruments. Together, Mann and Brozman have concocted the recipe for a music that is all their own, but seasoned by their separate backgrounds. Call it world music with Mississippi roots. Or maybe New Age with grit, it has the thunky dirve of 1920s bluesman Charley Patton, the haunting strains of a Gary Davis spiritual, a hint of Portuguese fado (via Mann’s 12 string Guitarra Portuguesa), oldtime boogie (powered by Brozman’s big baritone National), some saucy swing, gypsy waltz, exuberant jazz. Mix the ingredients together and the result is more than music with interesting flavoring. It is a feast.