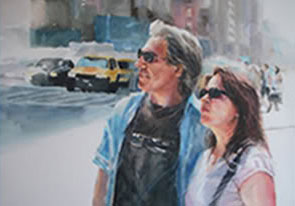 About Susanne Vogt and Woody Mann

Out of the BlueOut of the Blue is Susanne Vogt and Woody Mann’s most inviting recording to date. Woody’s performance and command of the guitar in a landscape of styles, is a handsome compliment to his solo projects. Together, with Susanne’s sensitive approach, endearing phrasing, and dynamic vocals, this new CD is a wonderful addition to their now, trio of releases.

This intercontinental bond of guitar, voice and song is a rarity in its success and flows with the deep musical affection they share for one another. Woody and Susanne each have their individual diverse careers in the US and Germany, but their steady desire to continue to perform and record as a duo always produces more than the sum of their parts. Susanne and Woody illustrate a musical portrait of soft hues, gentle curves, and polished edges. While Woody is recognized as being a member of the blues guitar royalty, he illustrates that his style is universal and diverse in his approach to his instrument. He moves across wide musical genres with his exploration of harmonic colors that wonderfully compliments Susanne’s vocal artistry that is loose and free. The interplay between them is a result of years working together even though they live oceans apart.

While imagining the ghost of Billie Holiday- guiding Susanne’s rendition of Don’t Explain, one could also envision the spirit of Django Reinhart in Woody’s accompaniment. But on Paolo, by Jeffrey Meyer, Susanne gives a controlled, haunting portrait in the loneliness of the words above Woody’s ascending and cascading lyrical guitar. Along with their nuanced selection of material from standards to contemporary songs, Susanne has earned well-deserved recognition as a gifted songwriter especially in collaborating with Woody’s wealth of compositions that is self evident on A Night in Tbilisi.

Vogt and Mann added New Yorker Brian Glassman on acoustic bass on some cuts, which does as much for Susanne in the contrast of their ranges in tone as it does for Woody, allowing for his rich accompaniment through complex, but beautiful harmonies to form the backbone of the songs. Percussionist Danny Mallon’s rhythmic colors weave the groove and subtleties to the stunning quartet arrangements.

Out of the Blue is a vibrant, subtle and reassuring taste of musical style and an enduring reminder of the connections between artists like Susanne and Woody who see the possibilities in each other, even beyond the borders of themselves.

“Together, Vogt and Mann spin musical stories that take you on an exiting new journey. It is truly a gallery of musical interplay and charm.”

“…a pair of song stylists who translate openly what they feel deep in in their hearts.”

“Susanne Vogt and Woody Mann – a perfect match! Who’s accompanying who? Listen to the the musical synergy that comes from working together for a long time- sharing same passion for every note.”

“…the interaction between the two is magnificent. Woody Mann as Susanne Vogt are both top musicians who explore and convey new dimensions on guitar and voice in musical undiscovered terrain with a very original approach to music.”